Skip to content
‘Kyle Did Nothing Wrong’: Attorneys For Teen Kenosha Shooter Say He Acted In Self-Defense

ttorneys for Kyle Rittenhouse, the 17-year-old charged with killing two people and wounding another during a riot on Tuesday, said the teenager “did nothing wrong” and only pulled the trigger to defend himself from harm.

“Kyle did nothing wrong. He exercised his God-given, Constitutional, common law and statutory right to self defense,” Pierce Bainbridge, the law firm representing Rittenhouse, said in a press release Friday evening. 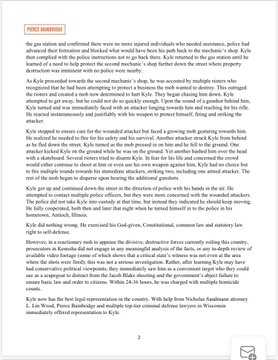