Thank You HURRICANE for helping me to put together with information on the next couple of articles.

By the authority vested in me as President by the Constitution and the laws of the United States of America, and in order to better enable a rising generation to understand the history and principles of the founding of the United States in 1776, and, through this, form a more perfect Union, it is hereby ordered as follows:

Section 1. Purpose. The American founding envisioned a political order in harmony with the design of “the Laws of Nature and of Nature’s God,” seeing the rights to life, liberty, and the pursuit of happiness as embodied in and sanctioned by natural law and its traditions.

The formation of a republic around these principles marked a clear departure from previous forms of government, securing rights through a form of government that derives its legitimate power from the consent of the governed. Throughout its national life, our Republic’s exploration of the full meaning of these principles has led it through the ratification of a Constitution, civil war, the abolition of slavery, Reconstruction, and a series of domestic crises and world conflicts. Those events establish a clear historical record of an exceptional Nation dedicated to the ideas and ideals of its founding.

Against this history, in recent years, a series of polemics grounded in poor scholarship has vilified our Founders and our founding. Despite the virtues and accomplishments of this Nation, many students are now taught in school to hate their own country, and to believe that the men and women who built it were not heroes, but rather villains. This radicalized view of American history lacks perspective, obscures virtues, twists motives, ignores or distorts facts, and magnifies flaws, resulting in the truth being concealed and history disfigured. Failing to identify, challenge, and correct this distorted perspective could fray and ultimately erase the bonds that knit our country and culture together.

The recent attacks on our founding have highlighted America’s history related to race. These one-sided and divisive accounts too often ignore or fail to properly honor and recollect the great legacy of the American national experience—our country’s valiant and successful effort to shake off the curse of slavery and to use the lessons of that struggle to guide our work toward equal rights for all citizens in the present. Viewing America as an irredeemably and systemically racist country cannot account for the extraordinary role of the great heroes of the American movement against slavery and for civil rights—a great moral endeavor that, from Abraham Lincoln to Martin Luther King, Jr., was marked by religious fellowship, good will, generosity of heart, an emphasis on our shared principles, and an inclusive vision for the future.

As these heroes demonstrated, the path to a renewed and confident national unity is through a rediscovery of a shared identity rooted in our founding principles. A loss of national confidence in these principles would place rising generations in jeopardy of a crippling self-doubt that could cause them to abandon faith in the common story that binds us to one another across our differences. Without our common faith in the equal right of every individual American to life, liberty, and the pursuit of happiness, authoritarian visions of government and society could become increasingly alluring alternatives to self-government based on the consent of the people. Thus it is necessary to provide America’s young people access to what Start Printed Page 70952is genuinely inspiring and unifying in our history, as well as to the lessons imparted by the American experience of overcoming great national challenges. This is what makes possible the informed and honest patriotism that is essential for a successful republic.

A restoration of American education grounded in the principles of our founding that is accurate, honest, unifying, inspiring, and ennobling must ultimately succeed at the local level. Parents and local school boards must be empowered to achieve greater choice and variety in curriculum at the State and local levels.

Vigorous participation in local government has always been America’s laboratory of liberty and a key to what makes us exceptional. The best way to preserve the story of America’s founding principles is to live it in action by local communities reasserting control of how children receive patriotic education in their schools.

(i) the Secretary of State;

(ii) the Secretary of Defense;

(iii) the Secretary of the Interior;

(iv) the Secretary of Housing and Urban Development;

(v) the Secretary of Education;

(vi) the Assistant to the President for Domestic Policy; and

(vii) the Assistant to the President for Intergovernmental Affairs.

(i) produce a report for the President, within 1 year of the date of this order, which shall be publicly disseminated, regarding the core principles of the American founding and how these principles may be understood to further enjoyment of “the blessings of liberty” and to promote our striving “to form a more perfect Union.” The Commission may solicit statements and contributions from intellectual and cultural figures in addition to the views of the Commission members;

(ii) advise and offer recommendations to the President and the United States Semiquincentennial Commission regarding the Federal Government’s plans to celebrate the 250th anniversary of American Independence and coordinate with relevant external stakeholders on their plans;

(iii) facilitate the development and implementation of a “Presidential 1776 Award” to recognize student knowledge of the American founding, including knowledge about the Founders, the Declaration of Independence, the Constitutional Convention, and the great soldiers and battles of the American Revolutionary War;Start Printed Page 70953

(iv) advise executive departments and agencies (agencies) with regard to their efforts to ensure patriotic education—meaning the presentation of the history of the American founding and foundational principles, the examination of how the United States has grown closer to those principles throughout its history, and the explanation of why commitment to America’s aspirations is beneficial and justified—is provided to the public at national parks, battlefields, monuments, museums, installations, landmarks, cemeteries, and other places important to the American Revolution and the American founding, as appropriate and consistent with applicable law;

(v) advise agencies on prioritizing the American founding in Federal grants and initiatives, including those described in section 4 of this order, and as appropriate and consistent with applicable law; and

(vi) facilitate, advise upon, and promote other activities to support public knowledge and patriotic education on the American Revolution and the American founding, as appropriate and consistent with applicable law.

(e) The Department of Education shall provide funding and administrative support for the 1776 Commission, to the extent permitted by law and subject to the availability of appropriations.

(f) Members of the 1776 Commission shall serve without compensation but shall be reimbursed for travel expenses, including per diem in lieu of subsistence, as authorized by law for persons serving intermittently in the Government service (5 U.S.C. 5701-5707).

(g) Insofar as the Federal Advisory Committee Act, as amended (5 U.S.C. App.), may apply to the 1776 Commission, any functions of the President under that Act, except that of reporting to the Congress, shall be performed by the Secretary of Education, in accordance with the guidelines issued by the Administrator of General Services.

(h) The 1776 Commission shall terminate 2 years from the date of this order, unless extended by the President.

(b) the Department of Defense, through the Pilot Program on Enhanced Civics Education; and

(c) the Department of State, through the Bureau of Educational and Cultural Affairs, and through opportunities in the Fulbright, U.S. Speakers, and International Visitors Leadership programs, as well as in American Spaces.

Sec. 5. General Provisions. (a) Nothing in this order shall be construed to impair or otherwise affect:Start Printed Page 70954

(i) the authority granted by law to an executive department or agency, or the head thereof; or

(ii) the functions of the Director of the Office of Management and Budget relating to budgetary, administrative, or legislative proposals.

(b) This order shall be implemented consistent with applicable law and subject to the availability of appropriations.

(c) This order is not intended to, and does not, create any right or benefit, substantive or procedural, enforceable at law or in equity by any party against the United States, its departments, agencies, or entities, its officers, employees, or agents, or any other person. 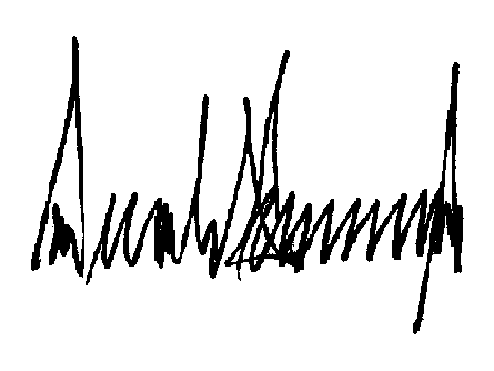 I decree and declare that President Donald J Trump won the November 3rd 2020 Presidential Election for what God has already done in heaven is done on earth. In Jesus name we pray. AMEN

Donald J. Trump
@realDonaldTrump
71,000,000 Legal Votes. The most EVER for a sitting President!

???????? BIDEN ADMITS TO VOTER FRAUD! ????????@JoeBiden brags about having the “most extensive VOTER FRAUD organization” in history‼️