with a story published in March 2017 about former national security adviser Michael Flynn.

*“This has gotten too deep,” one FBI investigator wrote to Peter Strzok.

*The investigator was responding to a report from The Guardian that U.S. and

British intelligence officials had concerns about Flynn’s interactions with a Russian-British woman in 2014.

FBI investigators expressed concern in early 2017 over the publication of a story that suggested Michael Flynn was the target of a Russian honeytrap operation, with one agent saying after the story was published that “this has gotten too deep.”

Peter Strzok, the deputy chief of FBI counterintelligence, also weighed in on the story, which appeared in the Guardian on March 31, 2017.

“WTF is this,” Strzok wrote after receiving the article, according to emails published by Judicial Watch.

“Not great,” he wrote of the story in another email.

The Guardian story said that U.S. intelligence officials “had serious concerns” about Flynn’s appointment as national security adviser because of contacts he had with Russians, including Svetlana Lokhova, a Russian-British researcher at the University of Cambridge.

Flynn met Lokhova during a visit to the Cambridge Intelligence Seminar in February 2014, when he served as director of the Defense Intelligence Agency (DIA).

The emails released by Judicial Watch show that an investigator in the FBI’s Washington Field Office emailed Strzok with apparent concerns about the story.

“Im [sic] you are tracking, but this has gotten too deep,” the investigator wrote Strzok on April 3, 2017.

“I wasn’t. WTF is this,” Strzok replied.

He forwarded the exchange to FBI lawyer Lisa Page, writing: “Not great.” 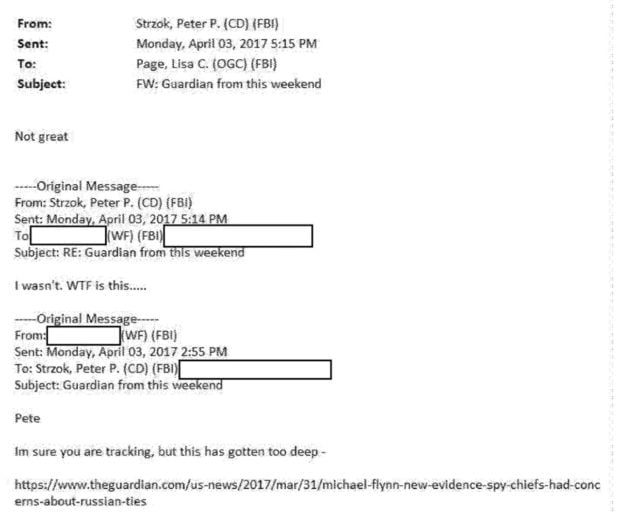 CHUCK ROSS
READ THE REST ON THE DAILY CALLER